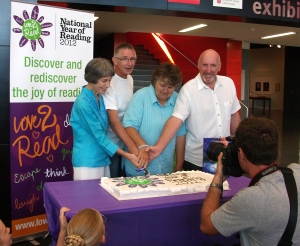 Having done the hard yakka of writing picture books I decided a couple of years ago to have a go at writing something a bit easier so I’ve been writing novels for older readers and young adults and more recently have completed the first draft of an historical novel for adults.

How can this be easier I hear you ask? There are more words, lots more words, like somewhere between 50,000 and 100,000 words! Yeah, but now I can use all that flowery stuff I wrote way back in high school. It also means I get to create characters and worlds that come alive and I can throw in all sorts of problems and dilemmas for the characters to overcome. It’s a lot of fun making life difficult for them!

Medusa Stone, the first novel in the series titled Hopscotch was published in 2009. My publisher, Walker Books Australia, liked it so much they asked me to write a second adventure for Hannah and Jake. This one is set in ancient Egypt during the reign of the pharaoh, Thutmose III and just like in Medusa Stone, our two warrior heroes face  a number of hair-raising situations, have to deal with the nasty tomb robber, Osorkon, and come up against some pretty sick beasts as they attempt to complete the task set by the Game Master, Kostas.

Even though I’m working on a couple of long novels at the moment that doesn’t mean I haven’t forgotten the good old picture story book. Edge of the World is my latest picture story book, which has taken over five years to reach fruition. A long journey, but well worth the wait! Set in a remote fishing village somewhere near the edge of the world, it has been beautifully illustrated by award-winning illustrator Wayne Harris and in the words of my editor, Donna Rawlins, “it’s a doozy.” 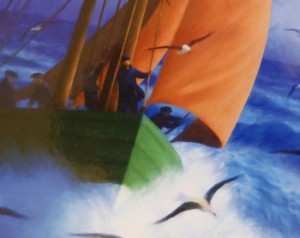 In the village near the edge of the world, storm clouds gathered above the harbour. Snowdrifts piled high against the breakwater and the village shivered beneath a blanket of snow. The wind shrieked and howled through the empty streets and women and children huddled closer to their hearths.

And nobody smiled in the village near the edge of the world.

While fishermen mended their nets and repaired their boats, they talked of towering seas and narrow escapes. But Toby McPhee did not join in. Instead, he plunged his brush into the sticky blackness of the tar pot and painted the deck. He had no wish to remember.

And nobody smiled in the village near the edge of the world.

Read about my other articles here>

When I do Author Visits children often ask me where I get my ideas from. Sometimes I tell them I go to www.ideas.com then I tell them the truth – that my ideas come from all over the place – from something I might have heard, (like “let’s paint the town red” which led to Edge of the World), or something I’ve experienced, (like when my daughter kept chooks which led to Delilah’s Dream, or my son’s fear of dogs which led to Quincy). Ideas are all around us and writers soon learn to be ‘tuned in’ to anything unusual or different or bizarre.

My most recent Young Adult novel, Of Boys and Boats, is with my agent. Here’s an extract…

Mad Mick Metcalf sat hunched in the wicker chair deep in the shadows of his verandah. He listened to the excited banter drifting across the street. The local kids had been gathering there for the last couple of nights. With his failing eyesight Mick could just make out their indistinct shapes beneath the street light.

He heard the voice of the one called Basher and he could see his bulky frame swaggering about amongst them. He reminded Mick of the rooster that used to strut about in the farmyard in the dustbowl they called the Mallee.  Basher’s voice was raised above the general chatter and Metcalf could tell that it was the voice of a bully. He watched as Basher confronted the tall boy with the blonde hair and started yelling at him. Mick thought of another bully, a bully from the distant past, a bully that strutted the trenches at Ypres. 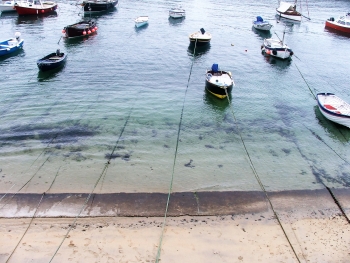 Captain Pearson strode through their ranks as they huddled shivering with cold and fear in the pre-dawn light on the Western Front, their feet swollen and sore from hours of standing in the stinking waters of the trenches; their skin raw and itching from the lice. The captain’s voice had a certain biting snarl to it; an edge of impatience and superiority that grated on Mick’s nerves; nerves already shredded by the weeks of constant bombardment.

“Not long now boyos and you’ll be over the top and giving those bloody Huns a right bleeding hiding. Look alive now! Get them bayonets fixed good and proper. Let the Hun feel the cold steel in his ugly guts.”

Mick winced as a shell exploded nearby, throwing huge clods of dirt into the air, the shock waves making his ears ring. It was alright for Pearson to act the hero; after all he’d be following the advancement from the safety of the rear. Mick had no illusions about what awaited him over the top. He’d seen enough of his mates cut down by the mincing fire of the German’s machine guns before they’d even cleared the trench ridge.

“There’ll be none of that weak snivelling!” snapped Pearson, shaking the shoulders of Clive who’d sunk to his knees in the mud beside Mick. Mick reached down and yanked his younger brother to his feet and patted his shoulder.

Satisfied, the captain moved on along the line and Mick pressed his half smoked cigarette into Clive’s trembling hand.

“Don’t worry,” Mick muttered, more to reassure himself than his brother. “The artillery’s softening ‘em up for us. We’ll be having a beer at Bethleem Farm tonight. There’ll be wine, women and song for sure.”

Another shell exploded nearby so that they buried their heads beneath their arms and when Mick raised his head he realised something was amiss. There hadn’t been the usual blinding flash, a flash that should have lit up the night sky. Rifle in hand, he scrambled up onto the trench step and peered between the sandbags. Out in No-Man’s Land, amidst the tangle of barbed wire and the twisted bodies and the ploughed earth he saw the yellow fog creeping towards them.

“Gas!” he whispered as he slid back into the trench and fumbled in his pack. “Quick!” he shouted at Clive, “Get your mask on! There’s bloody gas coming.” 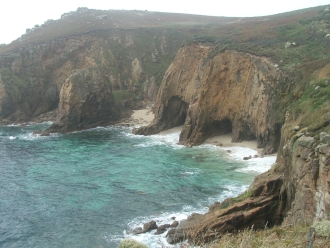 A couple of months ago I finally completed my first ever Adult Novel. (Loud applause). Now I’m undertaking the more difficult task of editing the 100,000+ words…

When a Scottish archaeologist unearths a wand belonging to a pharaoh’s magician, little does he realise the powerful forces he is about to awaken; forces that will wreak havoc, heartbreak and ultimately death on the lives of a disparate cast of characters as they seek to realise their dreams on the goldfields of Beechworth in 1857.

Angus McLeod stood on the foredeck of The Intrepid and braced his feet against the rolling deck as the ship pitched and ploughed through the ever increasing swell and the howling wind that sung through the lanyards. Overhead the canvas cracked and strained against the stiff south westerly that had sprung up overnight and caused the seas to become increasingly violent.

He tamped his pipe and drew in a mouthful of sweet tobacco and reflected on the fortunes and misfortunes of his most recent expedition in the desert sands of Egypt. He was returning to England with treasures that would undoubtedly bring him to the attention of the Royal Society and propel him to notoriety and acclaim. The dig had been successful in many respects, but he was still bitterly disappointed that his most successful result had resulted in near disaster and that he had barely escaped with his life following the collapse of the pharaoh’s tomb.

The ship suddenly pitched and rolled so violently that Angus was almost thrown off his feet. He gripped the railing and stared out at the heaving seas that were as black as the low clouds overhead. Salt spray stung his ruddy cheeks and he pulled his jacket tighter around his shoulders and staggered back along the deck towards his cabin where the wand lay wrapped in a piece of embroidered tent cloth and beside it lay open the Book of the Dead, the only two items he had managed to save before the walls came crashing down around him.  He would examine and puzzle over the inscriptions etched in the wand while the storm raged and perhaps unlock the secret of the hieroglyphics written there.