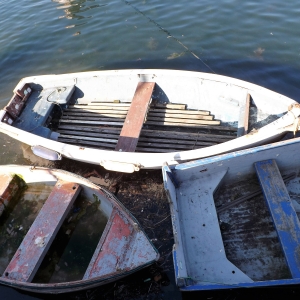 ‘Of Boys and Boats’ is another recently completed YA novel currently with my agent at Curtis Brown. Here’s a snippet …

I had one hell of a killer stitch. It felt like someone was plunging a sharp knife deep into my guts. Every time I tried to suck in a breath the knife plunged deeper. Even though my legs were pumping like jackhammers they felt like they were filled with cement. It was like being in one of those never ending nightmares; one where you’re being chased by a gigantic hairy spider or a slobbering red-eyed monster. No matter how fast or how hard you run it’s always there, right behind you, closing the gap.

“Bugger you, Percy!” I wheezed.

My breath came in short rattling rasps. Hot sweat stung my eyes. I wanted to stop, but I knew if I did they’d all call me piss weak. And they’d be right, but I wasn’t about to let them see just how piss weak I was. I kept running.

Skip ran beside me, loping along effortlessly. I envied the way he made it look so easy, like it was the most natural thing in the world to do. His tongue hung out the side of his mouth and a glistening rope of spit swung in the evening breeze. He looked up at me and I could’ve sworn he grinned.

“Don’t overdo it young fella,” Mrs B called from the front of her milk bar. “You’re not running for a sheep station you know.”

She was sitting on a stool beside the door fanning her face with her apron flap. Her dress was hitched up high and I caught a glimpse of varicose – veined legs and brown bloomers.

“Give my best to your dad,” she called after me.

I managed a nod, gave her a limp wave and kept running.

It was dark in the street. The only light came from the flaming torch I was struggling to hold above my head. By the time I rounded the corner I was wheezing loudly. As I neared ‘Bailey’s Wood Yard’ I faltered and slowed down. Bright lights blazed in the yard and I could see piles of freshly cut wood, stacked and ready for delivery. My eyes darted nervously about the yard, hoping that Basher wasn’t lurking there.

As I jogged past the open gates Basher’s dad looked up from beneath the open hood of an old army truck. He was a big bear of a man, a fuzz of coal black hair covering his arms and shoulders, his hair an untidy tangle of tight curls. His arms bulged from hours spent swinging his axe and coiled springs of hair poked out over the top of his sweat stained singlet. A pinched rollie hung from his thin lips. He gave me a narrow look before bending back over the engine. Skip growled. I kept running.

It had been Percy’s idea to have our own Olympic torch relay. “We can run it around the block each night while the real one’s being run from Darwin,” he’d suggested as I dinked him home from school.

“Yeah, well, you know what I mean,” he shrugged.

I agreed that it sounded like a good idea, especially because soon the real Olympic Torch would arrive at the Melbourne Cricket Ground for the start of the 1956 Olympic Games.