G’day and welcome to my website. My name is Ian Trevaskis, I’m an Australian author living in a beaut little country town in north-east Victoria, not far from the mountains where I love to ski the back country in winter. read more>

After submitting this story to a number of publishers without success, Ford Street Publishing in Melbourne recognised a good story when they saw one and offered me a contract to publish. What followed was over 12 months of extensive editing and rewriting under the guidance of two fabulous editors – Abbie and Robyn, and the book was released to the world in September 2020.

This story is based on many of my childhood experiences when growing up in Geelong in the 1950s, however, I must point out that I never pissed on a girl’s leg or fired a slingshot loaded with a dog turd! read more>

TO ORDER YOUR SIGNED COPY of ‘Of Boys and Boats’

You need to email me the following information…

If the book is for you, or a family member or friend, please indicate your/his/her name – I will include a short greeting along with the usual signature, or if you have a particular message in mind just let me know what you would like me to write.

OR    by cheque made out to Ian Trevaskis

Your order will be processed as soon as I receive payment and you will be notified when it’s in the mail. Please shoot me a quick email to let me know you’ve made a payment.

Thank you for supporting my work, oh, and some feedback would be nice!
Many thanks,
Ian

When I’m not writing I love to talk about what I’ve written or what I am about to write! If you are seeking an experienced speaker and former teacher then I’d love to hear from you. As a teacher with over 40 years experience I know all the tricks and ploys to maintain student interest and engagement all done in a fun and easy-going style. My Author Visits and Writing Workshops are presented using language and activities appropriate to the age group and include plenty of “hands-on” activities.

I have had wide experience both in Australia and overseas and am able to tailor my presentations to suit the needs of the school and the students. 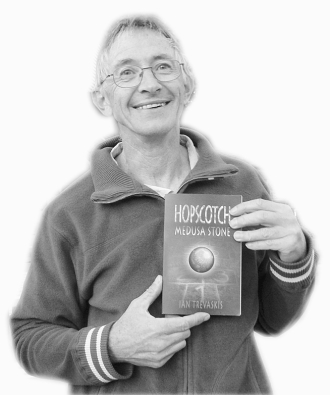 My most recent article about walking the Portuguese Coastal Camino, from Porto to Santiago de Compostela appeared in ‘Great Walks’ in January 2020.

A rooster crows in the misty morning air and somewhere in a distant village its call is answered. Silence follows, except for the steady tramp of our boots on the cobblestones worn smooth by those whose path we follow. We jump when a bell clangs loudly as we pass a church and enter a medieval square where water dribbles from an ornate fountain. Except for the sleek black cat stalking across the cobblestones, the square is empty. We stop briefly to admire the fountain before striding on. We are in Portugal and we are on ‘The Way’.

For many serious hikers, the Way of Saint James features high on their bucket list of ‘must-do’ hikes. Commonly referred to as the Camino de Santiago, it is a network of routes traversing Europe; routes that have been followed by pilgrims since the beginning of the 9th century, when the tomb of the Apostle James (Santiago) was discovered. Since then, people from all over the world have walked the Ways leading to the cathedral in Santiago, Spain, where relics of the Holy Apostle are venerated.

We had decided to take the road less travelled and opted to walk the Portuguese Coastal Camino, rather than its more popular counterpart, the Camino Frances, or French Way. Our route followed ancient paths through thick forests, villages, historical towns and cities, and was marked by innumerable chapels, churches, convents, shrines, and crosses, and the distinct shell symbol of ‘The Way’.

Ours was not a religious pilgrimage, but more spiritual in style – a retreat from life’s daily humdrum; an immersion in a richly textured culture, and an opportunity to experience the different customs and flavours of Portugal and Spain.

Over the past few years my articles have included stories about wilderness hikes to the source of the Murray River and the Cobberas Wilderness Area in NE Victoria; hiking England’s longest national trail, the South West Coast Path, a whopping 1014kms; and working as a Volunteer Track Ranger for Parks Victoria. My most recent article was about an eight day hike on Victoria’s Great Ocean Walk which appeared in ‘Great Walks’. My next article tells of a recent trip to Ireland where my wife and I walked the Wicklow Way.

I’ve also been fortunate enough to have a couple of stories published in the prestigious ‘The School Magazine’, a publication of the NSW Education Department that celebrated 100 years in 2016.

Here’s a bit about our trek on the Great Ocean Walk, following Victoria’s coastline from Apollo Bay to the Twelve Apostles…

A short walk takes us out of Apollo Bay and soon we’re walking with the ocean on our left and rural farmland on our right. It’s warming up so after an hour we hit the nearest beach for a refreshing dip followed by some nifty rock scrambling around Storm Point to Three Creeks Beach where we strip off, find a deliciously cool rock pool and dunk our sweaty bodies. After a leisurely lunch we head inland through shady coastal forests, slog our way up the track and by mid afternoon we’re at the Elliot Ridge campsite.

After a night filled with the screeches of nocturnal creatures we head off early following a wide, undulating management road through towering forests of Mountain Ash until we descend onto the beach at Blanket Bay. After lunch the afternoon alternates between lazing on the beach and swimming.

We reluctantly farewell our slice of Paradise next morning and begin the gentle climb to Point Lewis Lookout, continue through coastal forests and make the steep descent into the Parker River Inlet where we cool our feet in the river before tackling the 300 stone steps out of the inlet. It’s not long before our heaving bodies are crying out for another swim. When Crayfish Bay looms into sight we can barely contain our excitement as we discard packs and clothes. The water is crystal clear, the sun is a golden orb overhead and we wouldn’t be dead for quids.  We spend an agreeable hour on the beach before continuing on and soon the Cape Otway Light Station bobs up on the horizon and a little later we’re trudging through tea tree to our next campsite.

Noah’s Ark began as a story about a magpie who couldn’t sing and became a hero when she saved a small town from an approaching bushfire. Along the way the story morphed into something quite different, but with elements of the original story remaining. The story was published in ‘Touchdown’, a magazine produced by The School Magazine in June 2016 and illustrated brilliantly by David Legge.

As dawn’s light crept across the tree tops Noah Jones climbed the fire tower. He gazed over the mountains that hunched like a sleeping dragon. Far below in Tarara magpies welcomed the day with soft warbles and a butcher bird piped a song of hope, but the currawongs were silent. The townsfolk rubbed their sleepless eyes and sighed for rain. High in the mountains flames licked at the splintered carcass of a shattered tree. Wisps of smoke curled into the air and orange fingers whispered across the forest floor.

Wallaby sniffed the air before bounding off. Wombat’s whiskered nose twitched in alarm and lyrebird’s delicate tail trembled with fear. Echidna tasted the air before shuffling away and gang-gang cockatoos burst like fire crackers into the sky.

When Noah saw the flames racing up the mountainside he knew the dragon had awoken. A fiery storm of burning embers spewed from the dragon’s cruel mouth and swirled around the fire tower. In Tarara the fire crew scrambled aboard their tanker and as they rumbled down the main street the townsfolk’s hearts tightened with fear.

The air filled with choking smoke and the sun was soon lost in a blood red sky. The wind howled through the treetops and the mountains erupted into dancing dervishes of flame. When Noah clattered down the ladder he found the animals waiting. It was as if they knew he was their only salvation. As Noah’s ute careered down the track laden with its precious cargo he prayed that Tarara had not felt the dragon’s blistering breath. Near the bottom of the mountain a tree toppled across the track.

Noah stumbled from the ute, searching for an escape, but there was none. The wallabies thumped their tails and crashed through the bush, followed by the others. Close behind came Noah, for there was nowhere else to run. And suddenly Noah understood when he saw the pool of black water; a refuge from the firestorm raining overhead. Noah huddled in the water as the inferno swept over them and when the flames had passed he heard the calls of the fire crew and knew there was still hope.